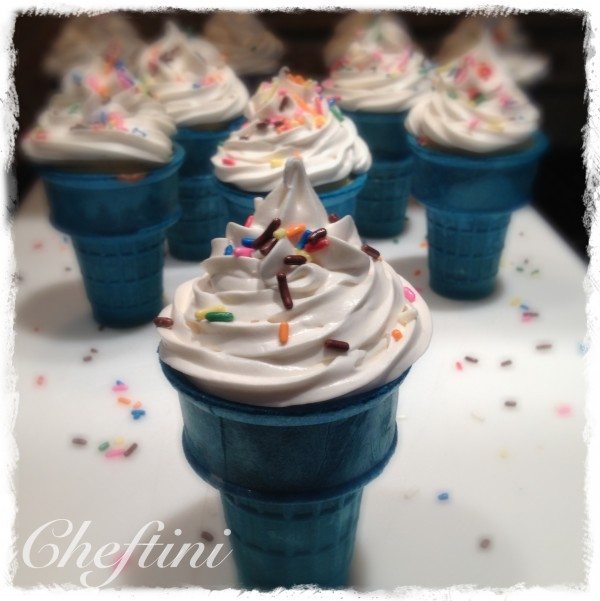 When we were growing up my mother would make ice cream cone cupcakes.  Everyone thought they were so cool, including me!  I recently found an old newspaper clipping, circa 1982, with a recipe for Party Cones (a.k.a Ice Cream Cone Cupcakes).  I found this article a few months ago and have painfully waited to attempt them.

To me, this a fun, must try desert.  Kick off the  Memorial Day holiday with this mess free, or should I say melt free

I started to make these late this morning, without a lot of time. I quickly made the store bought batter (sorry if that offends you but they make Duncan Hines/Betty Crocker for a reason 🙂 I quickly filled each cone with  batter – 2/3 full  as per the recipe.  Pre-heated my oven (i thought to 350 degrees F) and then even took some photos and optimistically posted pictures of my batter filled cones. I thought  this was going to be super easy. 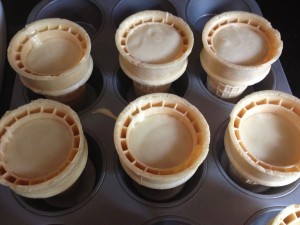 I mean, I make intricate Italian cookies with my eyes closed, how hard could a batch of  ice cream cone cupcakes really be?  Well, honestly, not as easy as I thought!  I completely messed up the first batch. Say what?! Oh yeah, when I checked on them, they were overflowing and the tops were really brown. Then I noticed the oven was not on the correct temperature.  I pulled them out after 20 minutes, turned off the oven and then I had to ran out the door.  On my way back home, I stopped for a new box of cones and then returned back home to 12 sunken, half baked cupcake cones.  I was so bummed and then I trashed the evidence, totally forgetting to take a picture or two (sorry!).

Luckily, I had an extra box of vanilla cake mix and set out to do it again.  This time taking my time, and doing a quick internet search to see what I might have done wrong.  the first time.  I couldn’t find any helpful tips, other than what I knew, fill them 2/3 to the first rim.  I decided to only cook a few cones this time, again filling  2/3 of the cone and popped them in the oven at 350 degrees F!   Filling them less and only cooking a few, they still overflowed, but they did cook through. 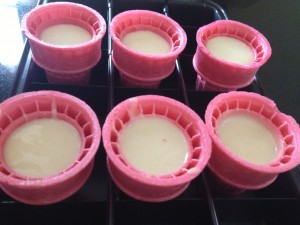 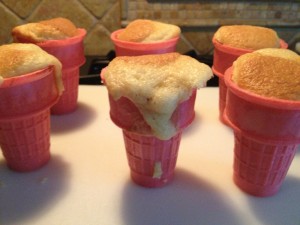 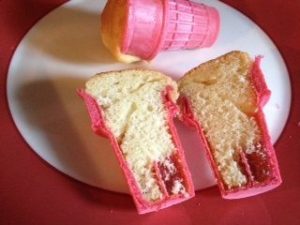 And so, I tried a few more, filling just less than 3/4.  I even had a “little” help the third time around, a little helper.  She must be my good luck charm (my lil helper) because this batch came out perfect!  I made the rest and was done! 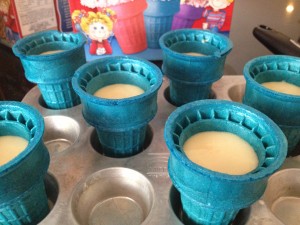 The next challenge was frosting these cupcakes to look like like Ice Cream Swirls.  I wanted my first attempt at this to be easy, so I used plain store bought vanilla frosting.  I did however, enhance it with confection sugar and vanilla extract.  I spotted this tip somewhere online.  I used a Wilton Cupcake plastic decorating bag with tip (star tip size 1m). I started on the outside counterclockwise, then worked my way in, and when I got to the center just pulled it up for the ice cream effect.  Then sprinkled with sprinkles! 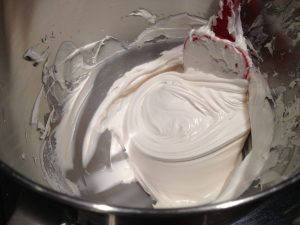 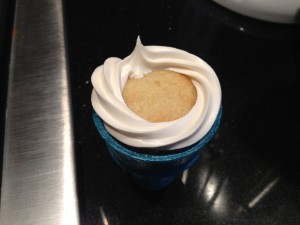 Even though they gave me a bit of a challenge, I am very proud of these Cone Cupcakes and how the final product turned out.  I hope that you will give them a try!

Of course you could use your favorite homemade cake batter and frosting for this recipe.
I opted for the semi-homemade version! TIPS:
1. I found mini muffin pans worked best for the size cones I used and there wasnt too much wiggling. Also, I made half the amount of cupcakes in each pan.
2.Do a small test batch before you bake all cones/cupcakes - you'll get a better idea of how much to fill or not to fill
Tried this recipe?Let us know how it was!
[jetpack_subscription_form]